What causes them to lash out?

Bullying has become far too common and dangerous. Bullies — both in person and cyber bullies — can destroy the reputation, self-esteem, and future of anyone from a kid at school to a successful business executive, even contributing to suicide.

No matter what age you are, being bullied is scary. It disrupts your life, destroys your peace of mind, and diminishes your confidence.

RELATED: Feeling Disrespected? Know When To Walk Away … Literally

What kind of person becomes a bully? The answer may surprise you.

There’s no question bullying is bad, unacceptable behavior. But it doesn’t mean the bully is a bad person.

Disclaimer: Nothing gives someone the right to attack you. Understanding what might be going on in the mind of an attacker who is very similar to you and me is enlightening and important for creating solutions in the future.

At its core, bullying is simply a negative and hurtful way to get someone’s psychological needs met — the same needs we all have.

As humans, we have six psychological needs that need to be met. Of these, three directly connect to bullying behavior: the need for certainty, connection and significance.

Here are 3 psychological reasons even good people can become bullies as a way to get their human needs met: 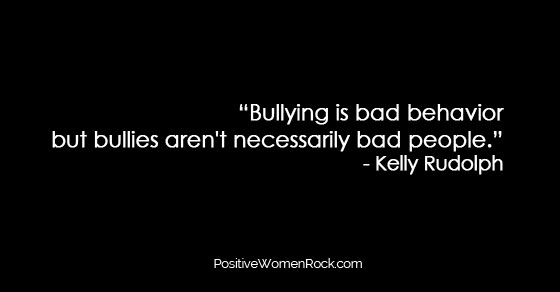 You may meet your need for certainty by knowing you are good at what you do, you have a supportive family, a safe home or solid career. However, a bully may not feel certain of anything in their life. Maybe what they felt certain about disappeared or they have never had it to begin with.

Think about how scary that would feel. What if everything you know for sure was suddenly taken from you? Would you feel desperate and out of control?

Bullying behavior gets the human need for certainty met. Attackers are looking for a power-fix to feel like they have control over something or someone since they feel out of control of their own life.

The bully feels certainty they can control someone by making them feel scared or intimidated and making an impact (although negative) on their life. There is a certainty the person will think about them later and may even tell other people about them, which can drive bullies to pick on others.

2. Bullying fosters a need for connection.

Your need for connection might be getting met by your family and friends, a group you belong to, or coworkers. In other words, you know you are not all by yourself. You are part of something bigger than you.

A bully, on the other hand, may feel isolated and alone even around other people. They may have lost people they felt connected to, or never had anyone to begin with. How would it feel to be all alone while everyone else seems to have someone to depend on? Would you feel alone? Abandoned? Scared?

Many bullies grow up with absentee parents who either don’t care to connect or don’t know how. And if there’s no connection between the child and the people who supposedly love them most, they may not see a way or know how to connect with anyone else — which can manifest later in life in the form of bullying.

And while the psychological need for connection need may not get met by bullying itself, the absence of connection increases insecurity and fear that can result in lashing out. Someone who feels betrayed or left alone feels desperate and doesn’t want to get hurt again.

For that reason, many bullies may not put themselves out there to form new bonds. It feels painful to risk being rejected so other ways to feel connected may be unknown to them or feel too vulnerable and uncomfortable.

And while many bullies have friends (like the “popular people” who bully), more often than not, those friends don’t really like the bully or want to be associated with them. They are simply afraid to leave for fear of becoming his or her next target.

RELATED: Use Confidence To Stop Being A Victim 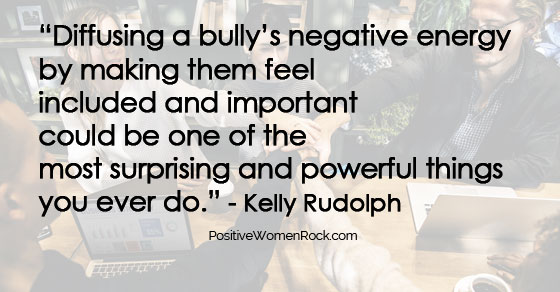 If you feel like you matter and that you make a difference in your relationship, friend group, family, or community, this need for you is met. However, a bully often feels like no one would notice if they disappeared. They feel invisible, unimportant, and insignificant.

Think how you would feel if you didn’t matter to anyone. How powerless would you feel in your own life? How could you even visualize a great future?

As a result, lashing out and engaging in bullying behavior is a way to get noticed. Even if the attention is negative, it feels better than feeling nothing.

Since we don’t get lasting benefit from negative behavior (drugs, alcohol, etc.), the powerful feeling wears off quickly and they must attack again to get it back.

If you know a bully, here are some ways you can help them get their needs met so they stop lashing out:

But now you know — and can help if you want.

RELATED: Why Putting Yourself First Is Good For You (& Being A Little Selfish Is Okay!)

You can also read this article on YourTango.com.

Hi, I’m Kelly Rudolph, founder of Positive Women Rock and I take women from stuck and stressed to clear and confident. We release self-sabotaging emotional baggage over the phone from ancestors and past lives in just minutes. This gives you a fresh start with a clear head and an open heart – ready for deeply connected relationships, success, happiness, and a healthy body. Connect with me and get my free Life Strategies now.