There are three secrets about conflict that we rarely discuss, partly due to a lack of awareness and partly because blaming is so easy, popular and acceptable. 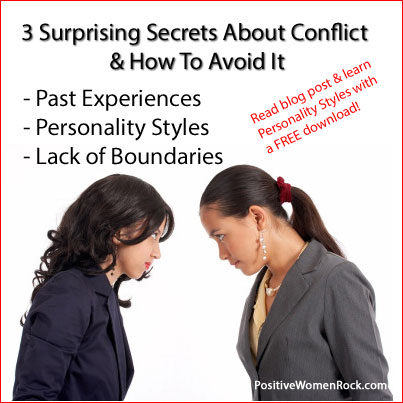 Everyone can relate to blame so we get to talk and talk and talk about it and all our friends understand and commiserate with us. Since all behaviors have pay-offs (or we wouldn’t have the behavior), what do you think the pay-off is for conflicts? I eluded to it in the previous sentence. We have conflict and because we can talk about it to other people who understand, we feel understood and part of something bigger than ourselves. The pay-off is belonging.

Let’s talk about the secrets as to why we have conflicts in the first place so you have a better idea of how to eliminate them when possible and how to restore your balance quickly when they seem inevitable.

We react to things based on our past experiences.

Example: If a boyfriend lovingly says the same words someone who previously caused you pain said, you may blow up at him. Is it him you’re angry at? No, it’s the pain from the past experience that got triggered and now you’re feeling like you’re right back in that situation along with all of the emotions surrounding it. This is why we, as adults often act like children when we fight. All emotional triggers lead back to emotions from our childhood.

You may think that you never ever had this situation happen before so how on earth could it trigger something from childhood? Studies and personal development processes show that following emotions back to their origin will lead to our childhood between the ages of birth and eight years old; some studies reporting seven years old.

Think about this example for more clarity about how this works. Adults conflicting over one having more control or attempting to take control over another may trigger back to an older sibling bossing us around when we were five. That emotion from our five year old self can be triggered today when we are 27, 35 or 60 years old. This is why there is so much emotion connected with conflict. You may have felt silly before for being so upset over something that seemed so menial; this could be the reason.

As we grow throughout childhood and adulthood, the emotions from our childhood along with all the events that triggered those same feelings again and again expand like a snowball rolling downhill. Something we hardly remember, if at all, from childhood may get triggered later in life and our unconscious emotional reaction to it is much bigger than it was the last time or the time before that. It may be challenging to trace it back to something that happened when we were little because we don’t recall anything that monumental happening back then. That’s because it wasn’t monumental back then but it is now because of all the snowball effect of us housing that emotional pain for so long (visualize our snowball again).

Different personality styles respond differently to situations and can cause conflict.

Example: If you are primarily one style and the person you are speaking with, working with or in a relationship with is a different one, you both may wonder why the other person doesn’t see things the same way you do. Maybe they respond completely opposite of how you would in the same situation. It’s baffling because what makes perfect sense to you may not make any sense to them. Or what may be important to you, may not be to them.

Let’s say something angers both of you; maybe you were both told something that turned out to be a lie. One of you wants to go after the person who lied and get them to admit the lie and apologize and the other of you just wants to put it behind them and move on. This can be a huge reason for conflict, especially since the person seeking justice and an apology cares about the fact that both of you were, in their estimation, betrayed and that someone should pay for it with an apology and rectifying the situation. Have you had challenges like this before? Be sure and let me know in a comment below.

Now that you know two secrets as to why conflicts occur while neither specifies which person is right or wrong, can you think back to situations you’ve been upset about and identify what may have been the reason that you weren’t aware of before?

Since I learned about these conflict secrets many years ago, I better understand how people differ greatly in their reactions to the same situation. This awareness doesn’t eliminate frustration and sometimes anger by any means because those are often automatic reactions we have based on our own personality styles and past experiences but it does facilitate quicker resolutions and the ability to grow through conflicts instead of just going through them.

Conflicts often arise because most of us are lousy at establishing and enforcing boundaries.

Boundaries are vital in protecting our mental, emotional and physical health yet we usually avoid them for fear that people won’t like us if we lay down the rules.

Example: Rather than allow someone to speak to you disrespectfully, you let them know you deserve common courtesy and they will need to use it in order for you to listen to them. There are ways to say or show this depending on who it is but I just wanted to make a bold point because having boundaries is a bold move most people never make.

Most of us who have established boundaries have been at our breaking point that was so painful, we welcomed the protection from boundaries and that reward was bigger than the pain of some people in our lives possibly disliking us. Going even further, those of us who actually enforce our boundaries have greater peace of mind, self-respect and people in our lives who are better aligned with our purpose and beliefs. That is because the ones who were simply using us for a power fix (their own ego issues) exit quickly because we’re not easy prey any longer.

An important point to remember is that you have every legal and moral right to protect and defend yourself. That may sound serious when you think maybe your feelings are just getting hurt or that you misunderstood and feel bad because of the way you took what someone said or did but it’s a fact and gives you permission to establish and enforce personal boundaries with everyone on your life, including how your children, boss and parents treat you.